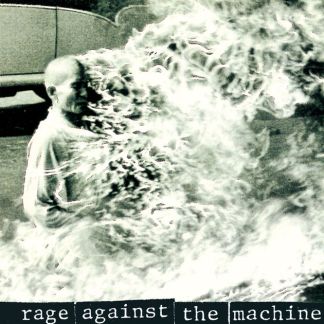 I have spent very little past personal time on either album.  With Rage’s self titled album, I would only hear a few selected songs at parties and bars.  And of course they were always giant jump orgies when they were on.  Similar to “Shout” (ala Animal House) or “Blister in the Sun”, “Killing in the Name” was the 90s bar anthem that got the crowd incensed.  When the song reached its climactic repetition of “fuck you I won’t do what ya tell me!” the whole dance floor became seething Maasi warriors, jumping and shouting their privileged defiance to the world.

Rage is the quintessential anti-establishment band, unhappy with the way things are. Conversely, its competitor for this round seems quite happy with the way things are.  Living, loving and rocking under a booze (and more heroin than I realized) fuelled haze. They have happily abandoned the idea of social justice. With Appetite for Destruction, they created their own little world where they are the powerful and the corrupt, taking advantage of their own people: Their fans (particularly the ladies).

This might sound like I am crapping on GnR (and I am a little), but I am actually quite excited to have given this album a solid listen.  Appetite stands out as a way more kick ass version of the prototypical 80s hair band. A lot edgier, with more metal-infused hard rock and blues. They are just taking it up a notch beyond the offerings of puffy rock bands like Poison.  Little did they know that grunge was coming and they were to be the last of their breed.

Appetite for Destruction remains a strong collection of decent rock songs. The hits alone give it legs. “Welcome to the Jungle”, “Paradise City”, and “Sweet Child O’ Mine” are pretty much prefect rock songs that give endurance to the listenability of the whole album. GnR may have known this. It’s possibly why they were spread so evenly across the album.

Hits aside, what is so refreshing to hear on Appetite are the freaking GUITAR SOLOS!!! Boy do I miss guitar solos.  On Appetite, with Slash, we are witness to one of the best rock guitarists puking out some of the best guitar solos.

But then there’s Rage’s Tom Morello. If grunge shot a bullet into the popular guitar solo, Rage, and the kick ass shredding of Morello, made sure that its afterlife was an ascension into Rock n Roll heaven.

So, for this round, in honour of the all mighty guitar solo, and because he have two of the greats here, the winner will be determined by the better shredder. Who had the better chops. Let’s lay it all on the line in a solo off. Slash vs. Tom Morello.

Classic Slash solos are hard rock masterpieces. Like on “Sweet Child O’ Mine”. Its bluesy/metal pallet is complemented by a fast virtuoso-style metal finish. I wish every song on “Appetite” had that solo. I could listen to that all day all night, all night all day. But the others aren’t like that. Although awesome, they are bit slower, more standard fare.

Tom Morello solos are like snowflakes. None of them is the same. From the standard fare rock solo in “Take the Power Back” to the multi tone space jam of “Know Your Enemy”, Morello’s natural understanding of layers, rhythm and feel puts him on some kind of other plane of musical existence. Maybe you could critique that the farts and whistles are only there for the sake of having farts and whistles, but I challenge that. He can turn the guitar into a metal-hop synthesizer!