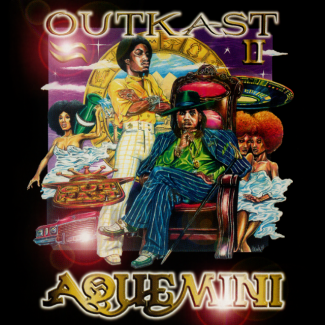 Get Happy does exactly as prescribed. Most songs feel like I am cartwheeling down a mountainside and nailing every rotation with a smile on my face. Elvis’s delivery, musically and lyrically, is completely forward moving. The album is in constant motion. The uptempo drums, the aggressive vocals, the falling melodic and chord change refrains, the big hit riffs. There is never a moment of rest, but it’s all energizing.

When it came out, Get Happy was seen as a bit of a flub. Mainly because it was a bit of a change from the three previous Attractions albums. The retroactive reviews have changed to the point where this is now seen as one of his best. That is great art, when the audience has to go to the artist and not the other way around. Sometimes, like this case, it can take a while.

I would always hear or read about how important Outkast was in the evolution of hip hop. Hearing Aquemini I can see why. This album is groove perfection. Every little sample or rhythm or even guttural “ugh” is completely calculated and flawlessly timed. The layering and blending of these precise ingredients created a stew of sounds that masks the rigid architecture, making it feel more natural and less mathematical. Like a well made hip hop ratatouille.

Outcast is really the first Southern hip hop mainstream group. Their impact no doubt spilled into how the East and West Coast hip hop scene would develop. Aquemini was an instant classic immediately and was revered by those who followed them, having a profound influence and musical impact.

So, this battle was fun in terms of discovering two great albums, but it’s a tough one to decide on. If I were to pick the one I like most and will probably include in my future musical rotation, Get Happy is that album. If I am to pick the album that had the most impact, I gotta think that Aquemini influenced more simply because it was immediately loved by both fans and critics. This time I shall go with the one that I simply just like better.

WINNER: Elvis Costello and the Attractions, Get Happy!! (4 points)