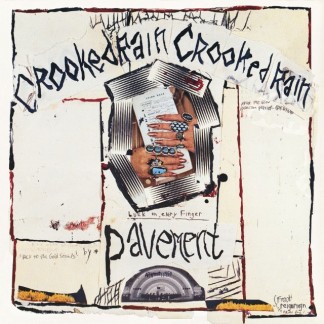 Amid the hair metal and synth pop of the late 1980s, political folk was reborn in the unlikely form of Tracy Chapman with her debut album. It was like Greenwich Village Bob Dylan had come back as a 24-year-old black woman. The album was a huge hit and deserved to be: clean and simple folk tunes (with a couple love songs tossed in) that earworm into your head and stay there. It’s a clear statement of purpose railing against inequality and injustice. It’s also occasionally chilling, such as the domestic abuse tale of “Behind the Wall”, performed a cappella. It’s depressing to realize the problems she highlights are as real today as they were then.

Is it too obvious to say “Fast Car” is my favourite? It’s a perfect short story about a young woman clinging to hope as she trades in one useless companion (her deadbeat dad) for another one (the deadbeat owner of the fast car – whom in 1988 I assumed was a guy but that’s less obvious to me now). That song is so damn good it was everywhere in 1988 and even today kids like my daughter discover it and love it (I honestly had nothing to do with it – she just found it on Spotify one day and started playing it all the time).

But really, though Crooked Rain references the burbs and the music biz, with Pavement it’s the sound and feel that matter, not the words or themes. Quoting lyrics to get to the heart of Pavement is misguided. Go online and print some out and you’ll see that, taken on their own, they’re generally meaningless.

Just to prove how true this is, the last song on the album – the awesome guitar jam “Fillmore Jive” ends with an incomplete sentence: “Their throats are filled with…”. You gotta love a band with the Chutzpah to let that be their last word.

Crooked Rain is confusing and disorienting (though it’s considered a “mainstream” effort by an otherwise very alternative band), and it is awesome. Trippy and weird. Sometimes it’s loud and abrasive, sometimes it’s melodic and mellow. Every song is unique. My favourite (at the moment, anyway) is “Range Life”, in which the narrator meanders through his California suburb on a skateboard, pondering existence.

I’ve spent so much time listening to “Fast Car” and “Range Life”, it’s starting to sound like a conversation in my head between Tracy’s restless dreamer and Stephen’s aimless slacker. Just for kicks, here’s how it plays out using actual lyrics from two phenomenal but totally unrelated songs:

TC: Say remember when we were driving, driving in your car / Speeds so fast it felt like I was drunk

SM: Run from the pigs, the fuzz / The cops, the heat

TC: Maybe together we can get somewhere

TC: I’d always hoped for better / Thought maybe together you and me’d find it

SM: Until you snort it up or shoot it down / You’re never gonna feel free

TC: We gotta make a decision / Leave tonight or live and die this way

SM: Hey, you gotta pay your dues / Before you pay the rent

Weird. That worked even better than I imagined (Pitchfork should try it).

It also makes me feel bad because it makes me root for Tracy, but this battle isn’t looking good for her. As near-perfect as her album is, my enjoyment level on listen #20 is the exact same as on listen #1. Crooked Rain, on the other hand, gets more interesting with every listen. The trajectory is clear – in art, over the long term, the strange puzzle beats the statement of purpose.